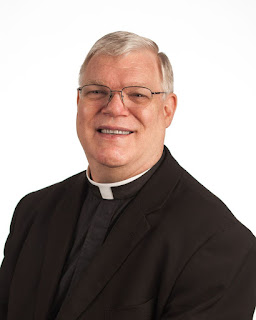 The Rev. Fr. James Brzezinski
The Rev. Fr. James Brzezinski is a cradle Episcopalian, baptized as an infant, who grew up in New England. In his youth, he sang in the Royal School of Church Music – Men and Boy Choir training program in his parish. Involvement in public school music classes and musical groups, church music, studying piano and organ, youth group, Sunday school, serving as an acolyte and eucharistic minister, James found his life centered around faith and activities in the church. During his confirmation by the bishop he felt the Holy Spirit issuing a call to religious service.

He attended Westminster Choir College in Princeton, New Jersey where he studied organ, voice, choral conducting, and music education. He suspended his musical studies and became an apprentice to a pipe organ builder in Wallington, New Jersey. Moving back to his home state of Connecticut he apprenticed with an organ pipe maker, learning the specialized craft of building the metal organ pipes. He then moved to California to work with the organ builders on the organ at Robert Schuller’s “Crystal Cathedral” in Garden Grove California.

While living in Long Beach, he joined an Episcopal church there singing in the choir, serving as a lector, lay reader, chalice bearer and substitute organist and choirmaster. After the Crystal Cathedral project, he accepted a position with an organ builder in Lakeland, Florida, where a year later he met Nancy Bock, a talented organist trained in Hamburg, Germany. Within ten months Nancy and James were married.

He operated his own business making organ pipes for other pipe organ builders. After closing his organ pipe shop he worked for the citrus processing company where his father-in-law was CEO. He assisted in managing the domestic and international logistics of shipping Frozen Concentrated Orange Juice.

Feeling the call to priesthood again, he returned to college and completed his Bachelor of Business Administration degree at Belhaven University. He spent three years as a seminarian at Nashotah House Theological Seminary in Wisconsin earning the Master of Divinity Degree.

He has served Jesus Christ as a layman in Connecticut, New Jersey, California, Florida and Wisconsin. Since his ordination he has served churches in Wisconsin, was called as a Curate to the Church of the Holy Faith, Santa Fe, New Mexico, serving as Assistant for Pastoral Care and Liturgy, and was appointed Priest-in-Charge at St. Francis on the Hill in El Paso, Texas, serving as priest, healer, peacemaker, and rebuilder.

In May of 2017 he received a call to be the Rector, priest, and pastor of The Church of St. Anne in Morrison, Illinois, beginning his ministry at St. Anne’s on July 1, 2017.

He enjoys welcoming people into an ever-deepening relationship with Jesus Christ.

Fr. Brzezinski is always available for Pastoral Care, Confession, Spiritual Direction, Prayer or Conversation.  Please Call Fr. Brzezinski on his cell phone: 407-761-5665 or the office: 815-772-2918 for an appointment, or email Fr. Brzezinski: revjamesbski@gmail.com.
Posted by St. Anne's Episcopal Church, Morrison, IL at 8:53 AM No comments: